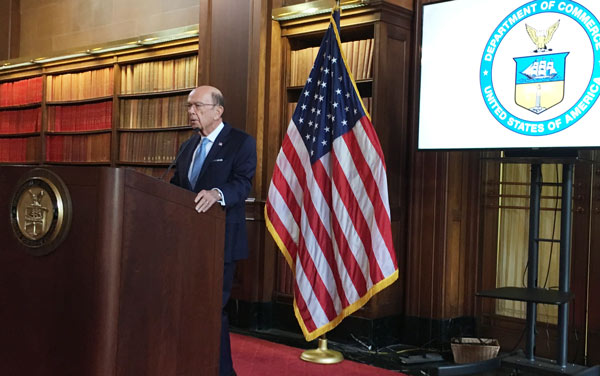 On April 17, 2019, the Department of Commerce hosted a public meeting to discuss the National Space Council’s ongoing review of space export controls under Space Policy Directive-2, “Streamlining Regulations on Commercial Use of Space.” Over 70 attendees from 60 commercial space firms, associations, and other organizations participated in the event.

Kevin O’Connell, Director of DOC’s Office of Space Commerce, opened the meeting with remarks recognizing the need to improve the export control process to better serve industry needs while continuing to protect national security. He said the ongoing review is not just about changing specific controls but also about clarifying and refining the existing control text where it may be ambiguous or unintentionally broad.

Scott Pace, Executive Secretary of the National Space Council, delivered remarks focusing on the need to improve the burdensome user experience for the space export control system, which can restrict innovation and disproportionately impact smaller companies with fewer legal resources. He highlighted the need to regularly solicit and incorporate feedback from industry on how regulations should be implemented to better suit their business needs. He noted that space export controls are necessary, and that regulatory streamlining and improving user experience should not be confused with “relaxing” controls on critical technology. He highlighted the broader strategic challenges from economic competitors such as China, and said the U.S. needs to safeguard against regulatory changes or licensing policies that could inadvertently benefit adversaries and competitors.

Rob Monjay of the State Department’s Directorate of Defense Trade Controls (DDTC) discussed the Advanced Notice of Proposed Rulemaking (ANPRM) issued by his organization to solicit public inputs on Categories IV (launch vehicles) and XV (spacecraft) of the U.S. Munitions List (USML). The ANPRM includes questions on how the government should characterize new commercial activities in space, such as on-orbit servicing, to differentiate them from national security missions.

Monjay encouraged industry to apply inventive thinking on new ways that export controls can be implemented to support commercial needs, without necessarily changing control parameters or removing technologies from the USML. As examples, he mentioned using license exemptions and integrating USML components into Commerce Control List (CCL) items. He said companies will have a better chance of achieving their business goals by proposing innovative approaches rather than requesting changes in parameters or jurisdiction. He cited the control parameters for remote sensing systems as an example of a compromise that was hard fought and unlikely to change.

Regarding launch vehicles and engines, Monjay noted that the Missile Technology Control Regime (MTCR) establishes the basis for U.S. government policy but does not dictate the implementation of U.S. export controls. He said companies should not allow concerns about MTCR to hold back a request related to launch technology. He also said changes to MTCR policy are outside the scope of this review.

Monjay said that to support new approaches, the government needs a detailed understanding of company business cases, explaining exactly how USML technologies are used commercially and how this differs from military use. He said companies should also state which technologies the government should prioritize to support ongoing or near-term activities, as some regulatory impediments may be addressable through flexible implementations without actual rule changes. He said the government has ways to discuss and protect proprietary information, but for this to happen, the discussions must be tied to specific comments entered into the public docket. He encouraged all parties to submit comments on the ANPRM by Monday, April 22, to have their views considered. Comments can even be submitted anonymously.

Dennis Krepp of the Commerce Department’s Bureau of Industry and Security (BIS) gave similar remarks about BIS’s parallel ANPRM. He reiterated that commenters should provide as much detail as possible about controlled technologies that have come into normal commercial use, including how those technologies are used and their availability from foreign competitors. He said it is useful to flag technologies needed to support near-term (<5 years) business plans. He described the interagency process that balances commercial interests with those of the national security community.

Krepp noted that the BIS ANPRM includes questions about specific items such as satellite thrusters, gyroscopes, star trackers, and Kapton tape. He said these were based on ad hoc comments received over the years, and advised interested parties to comment on these topics in the official docket, even if they previously provided inputs.

Krepp reiterated that the government can hold proprietary discussions with companies, but only if the companies submit public comments proposing a change and providing a substantive rationale for it.

The presenters then answered questions from the audience, which are summarized below.

Secretary of Commerce Wilbur Ross made a brief appearance at the end of the meeting to underscore the importance of the space export control review to DOC and U.S. industry, and to encourage participants to submit comments by April 22.

Following the open meeting, the government held a series of private consultations requested by individual companies to hear their proprietary questions and views.

Q1: Why did BIS include positioning, navigation, and timing (PNT) technology in its ANPRM of November 19, 2018, regarding emerging technologies that may need new CCL controls?

A1: That is a matter of internal discussion and beyond the scope of today’s meeting.

Q2: Commenter noted that the U.S. government has issued a large number of concurrent requests for public comments (ANPRMs, NPRMs, RFIs) related to space, and that the need to review and comment on them all at once is becoming a burden for industry, particularly small and medium enterprises.

A2: We appreciate and understand the feedback, and did suggest longer comment periods internally, but the Administration wants to leverage the current momentum to move forward on the regulatory reform efforts. We encourage you to file comments now to the best of your abilities, then if you have further details to provide based on those comments, we can work with you to collect those later in the process.

Q3: Any commentary from foreign governments and companies? Is there similar demand to change foreign licensing processes?

A3: We did get comments from a few multinational companies during the previous round of export control reform, and they have continued to bring proposals to us over the years. Their inputs were taken into account by the interagency working group as we developed and issued the main rulemaking in 2014 and incremental rule changes since then. After the main rulemaking, we heard anecdotes about competitors in Europe being unhappy that they no longer enjoyed a marketing advantage by offering “ITAR-free” satellites. We have worked through the Wassenaar Arrangement and MTCR to make multilateral changes that parallel the changes made in the U.S. system, such as establishing the 9X515 (spacecraft) series on the Commerce side. Our partners are generally following our lead in this regard, though it’s a work in progress. We continue to try to harmonize internationally the controls on items that are on the CCL but not under Wassenaar. There is similar movement with our MTCR partners to get creative about how things on the USML might be licensed or exempted.

Q4: Before export control reform, all space exports were licensed by the State Department, but now it is more complicated because companies must self-assess whether their items fall under State or Commerce rules, and sometimes dual licensing is needed. How has that played out?

A4: We got some complaints early on, but things have improved as people have gotten more comfortable with the new process and understand how to apply it. They are recognizing the advantages to the Commerce process, such as the availability of license exceptions and the lack of user fees.

Q5: Have you considered establishing a regular, mandatory review of USML and CCL to keep the process going after this Administration?

A5: We did establish a regular review cycle of two years, but it has being going slower than that for other USML Categories. We moved up our review of the space-related Categories in response to the National Space Council’s interest.

Q6: Do you have sufficient staff to be effective and efficient?

A7: BIS has sufficient personnel slots, but they are currently vacant. BIS will advertise for the positions soon.