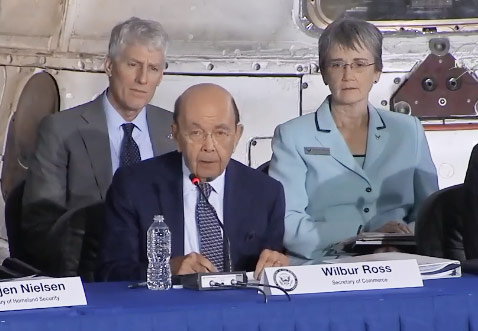 Today, Secretary of Commerce Wilbur Ross participated in the second meeting of the National Space Council, held at the Kennedy Space Center in Florida.

Among other things, the Council approved a set of recommendations to the President for regulatory reforms and other actions intended to unleash the economic potential of the U.S. commercial space industry.

One recommendation, announced by Secretary Ross, is to move and consolidate the Office of Space Commerce and the Commercial Remote Sensing Regulatory Affairs Office into the Office of the Secretary. The elevated Office of Space Commerce would serve as a one-stop shop providing regulatory and policy support to the space industry. Other Commerce bureaus will receive additional funding to support their space focused activities. This is consistent with the direction provided last week in the DOC Strategic Plan.

As part of this recommendation, Secretary Ross also called for improvements to the commercial remote sensing licensing process and the development of a new space mission authorization framework covering all U.S. commercial space activities beyond the jurisdictions of FAA and FCC.

Also during the meeting, the Council announced the completion of the National Space Strategy and the establishment of the Council’s Users’ Advisory Group. View membership at whitehouse.gov