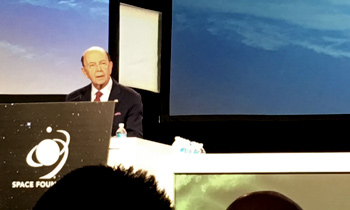 Among other things, they announced the development of a new, comprehensive policy on space traffic management (STM) to be approved by the President.

The policy directs the Department of Commerce to provide a basic level of space situational awareness (SSA) for public and private use, based on the space catalog compiled by the Department of Defense, so military leaders can focus on protecting and defending national security assets in space.

The policy will also encourage the commercial space industry to partner with the government to develop data-sharing systems, technical guidelines, and safety standards to apply domestically and be promoted internationally that will help minimize debris, avoid satellite collisions during launch and while in orbit.

Secretary Ross announced that the Department of Commerce will convene an international space regulatory conference in the U.S. no later than January 2019 to discuss STM coordination with private industry.