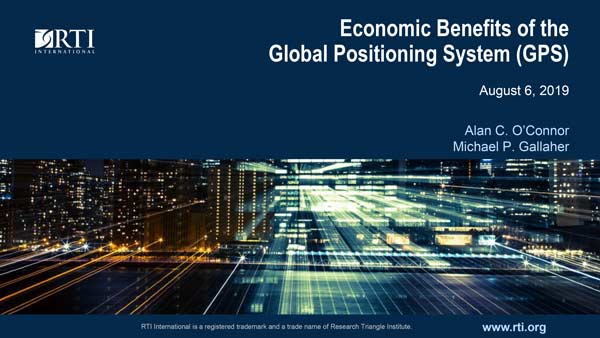 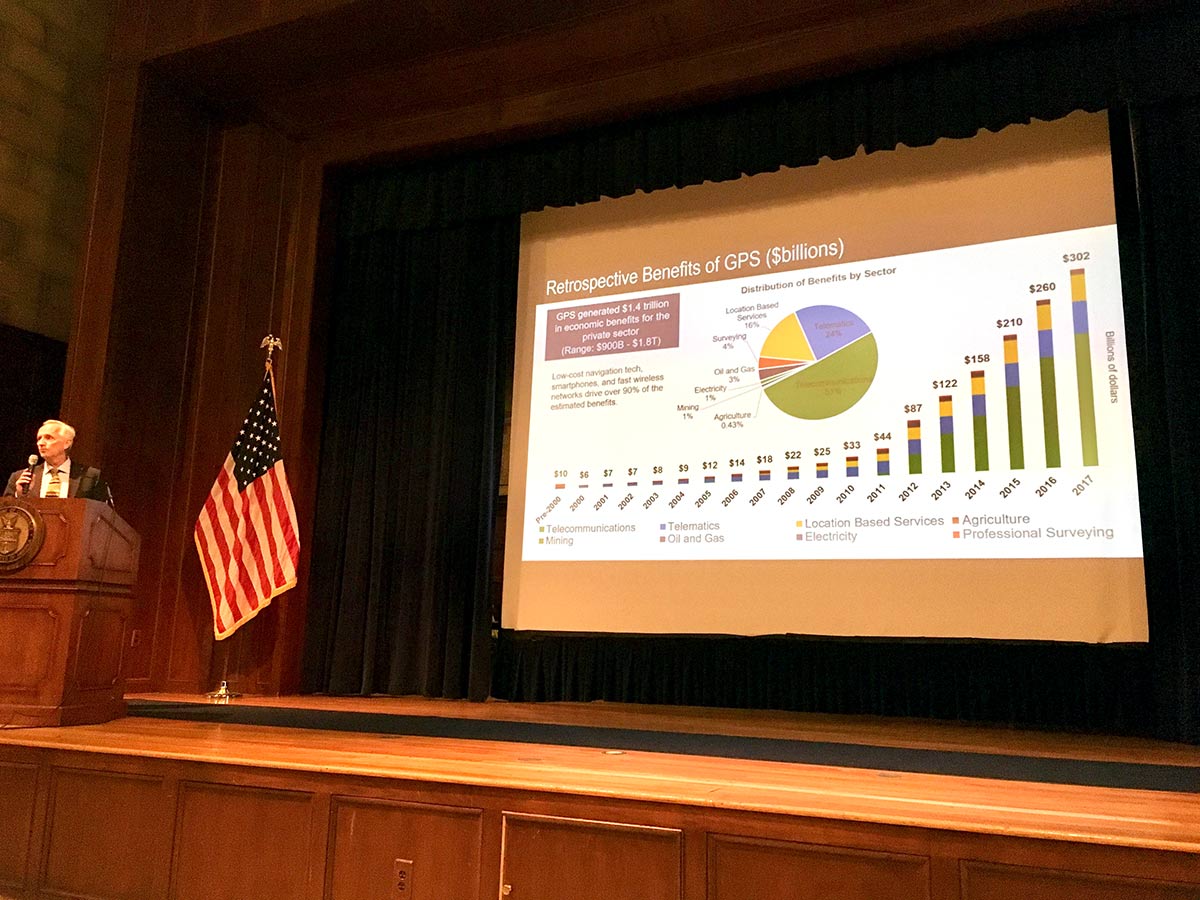 On August 6, the Office of Space Commerce hosted a public briefing to discuss a recently published study of the economic benefits of GPS.

The study, sponsored by DOC’s National Institute of Standards and Technology (NIST), estimates that GPS generated $1.4 trillion in U.S. economic benefits since the system became available in the 1980s.

Alan O’Connor and Michael Gallagher of RTI International, who conducted the study, delivered the main presentation and took questions from the audience.

The event opened with remarks from OSC Director Kevin O’Connell and NIST Director Walter Copan. Their remarks (as prepared for delivery) are provided below.

Secretary of Commerce Wilbur Ross, of course, has taken a strong personal interest in this industry — to the point that he actually made it Strategic Objective 1.1 in the Department’s strategic plan to “Expand Commercial Space Activities.”

We are excited by the potential for this innovative U.S. business sector to play a significant role in growing from a $400+ billion global industry today to a trillion dollars within the next two decades.

My office is working on multiple fronts to facilitate that growth and ensure the United States remains the country of choice for companies doing business in space.

First, we are advocating for the interests of the U.S. commercial space industry – both within domestic policy making processes, such as those directed by the National Space Council, and internationally, where we work with the International Trade Administration to promote U.S. space exports and ensure fair market access.

Second, we are working to revise and streamline the federal regulations that apply to space activity — many of which are decades old and based on assumptions that have been overcome by recent technological and business model innovation. At this moment, the Department of Commerce has two ongoing rulemakings on satellite imaging and space export control that are intended to unleash U.S. industry from unnecessary red tape and let them flourish in the increasingly competitive space market.

Third, we are engaging with industry to understand their needs and keep our finger on the pulse of innovation — so as to inform the industry advocacy I talked about as the government develops new policies and regulations. In addition to meeting with dozens of companies, we have held a number of events where Secretary Ross and our office have spoken directly with the space industry about their specific needs for financing, insurance, space situational awareness, regulatory relief, and other topics. Our ability to harness commercial innovation is one of the reasons that Commerce was directed to undertake new space situational awareness and space traffic management responsibilities, in partnership with the Department of Defense.

Finally — and most fitting for today’s event — my office is taking steps to improve our understanding of the economic value of space, so we can communicate that to the public in ways they can relate to. If you ask the average layperson what space means to them, they might talk about the inspiration of Apollo and maybe the International Space Station. But they probably won’t mention how satellites bring them the news and live coverage of sporting events. They also might forget that the navigation app on their phone uses GPS satellites and maps derived from satellite imagery. And they probably have no idea that many gas stations and ATMs use satellite communications to authorize transactions. Space capabilities are so deeply integrated into our daily lives that we now take them for granted.

A number of industry studies have attempted to put a number on the value of space to the economy. The trillion dollar figure I mentioned earlier was a global revenue projection that came from several reputable investment banks on Wall Street. We at the Department of Commerce are interested in all of that scholarship and want to contribute to its advancement ourselves. We are looking at ways to mine our wealth of economic data and statistics, such as the Economic Census, to extract useful narratives about the importance of space commerce.

In addition to that, over the years, we have done a number of different studies on the economic benefits of GPS. I’m told that the first Department of Commerce study over 20 years ago, projected that GPS equipment sales would reach a whopping $8 billion by 2000! Yesterday, at a workshop in New York City, we heard that location-based services represent over half of a $400B geospatial services market.

Those of you in the GPS community already know this, but the Commerce Department actually hosts the National Executive Committee that manages GPS as a national asset. To be clear, the GPS satellite system is acquired and operated by the Air Force — but we have a national policy to ensure GPS is responsive to both civil and military needs. That is the purpose of the National EXCOM, co-chaired by the Departments of Defense and Transportation, with Commerce as a key member. In fact, I just attended its latest meeting last week.

The EXCOM has spent many years discussing the nation’s increasing reliance on GPS — and the need to ensure commercial users and critical infrastructures do not become over-dependent on it as a sole source of position, navigation, and time. As we all know, GPS doesn’t work very well in tunnels, urban canyons, or indoors. The reason is that the signals become faint after traveling 12,550 miles from space. This makes them susceptible to interference, such as from solar storms, and raises concerns about intentional jamming and spoofing from bad actors. The government is reaching out to critical infrastructure owners and operators through various channels to raise awareness of the need to shore up the nation’s resilience to GPS disruptions.

The NIST study you will be hearing about today will be used to highlight the extent to which our economy benefits from GPS, as well as the harm that would be felt if we lost access to it. In fact, it was the National EXCOM that specifically requested that Commerce assess the potential impacts of an extended outage of GPS. My office worked with NIST to add that into the scope of the study.

We know many critical systems have backup or holdover capabilities that can coast through disruptions of a few hours or days. But what happens if the problem lasts longer than that?That question is no longer theoretical. Last month, Europe’s version of GPS — called Galileo — suffered a weeklong outage, for reasons that have yet to be made public. Thanks to the Air Force, the GPS satellites have never experienced a problem of that scale. But we are seeing reports of local jamming and spoofing with increasing frequency, so we need to take prudent steps to mitigate the associated risk.

There is some debate over whether the government should field a GPS backup or complementary PNT system for critical infrastructure — and our study is already being cited in that debate. I will just point out that NIST does makes UTC available to the private sector so it can be disseminated independently of GPS. NIST is also working with industry on a reference architecture for integrating GPS with other time sources to improve resilience in critical networks that use precise time for synchronization. But rather than go on about that, why don’t I let NIST tell you the story.

We are delighted to have with us today the Honorable Walter Copan, Under Secretary of Commerce for Standards and Technology and NIST Director. Dr. Copan has had a distinguished and diverse career as a science and technology executive in large and small corporations, U.S. government, nonprofit and other public-sector settings. He has extensive experience in intellectual property strategy, technology commercialization, and entrepreneurial business creation. Dr. Copan attended Case Western Reserve University, where he earned not one but two bachelors degrees (chemistry, music) and a Ph.D. (physical chemistry).

As with the other Commerce Bureaus, I am thankful for the partnership that the Office has enjoyed with NIST since my arrival just about a year ago.

Lab-to-Market is co-led by NIST and the White House’s Office of Science and Technology Policy.

Lab-to-Market recognizes the importance of not only counting tech transfer metrics, such as patents issued and licenses executed, but also the long-term downstream impacts of these technology transfer activities to demonstrate the true value of Federal R&D and tech transfer – such as jobs created, increases in tax revenues, products brought to market, cost savings to the private sector, or lives saved or improved.

One of the major goals of Lab-to-Market is to “enhance the effectiveness of technology transfer by improving the methods for evaluating the ROI and economic and national security impacts of federally funded R&D, and using that information to focus efforts on approaches proven to work.”

A meta-analysis of prior NIST studies showed a return of $9 of economic impact for every $1 invested by NIST.

The widespread use of the Global Positioning System and its impacts on the U.S. economy are a compelling success story that supports the need for continued Federal investment in R&D and technology transfer, as well as demonstrating the timescale on which basic and translational research ultimately provides benefits to the economy and the taxpayer.

Today’s presentation shows the vast impact that Federal research investments and technology transfer activities can have on the U.S. economy when breakthrough technological advances produced with Federal funding are made available to the private sector for commercialization and to the public for use.